The black color of tires comes from carbon black, a readily-available material that provides greatly improved wear characteristics and heat-dissipation capabilities when added to rubber compounds.

Natural rubber is off-white in color, and in fact the first rubber tires were white. Pure vulcanized rubber is soft and wears out very quickly, however, and tends to heat up and deform under load. So you want to mix something in with the rubber that adds temperature stability and hardness — originally this was typically zinc oxide which made the tires bright white in color.

Around the time of World War I zinc oxide began to be replaced with carbon black, which had even better characteristics and was becoming more available as a byproduct of coal and oil production. As the benefits of adding carbon black to the compound became known, that additive was used just on the tread portion, while the side of the tire remained the natural color — this is where the (now mostly gone) tradition of “whitewall tires” came from. In a true (antique) whitewall tire the light color is present througout the wall of the tire; later versions overlaid a thinner layer of white rubber on the black tire to give a whitewall look:

It’s possible to make other colors by simply using other pigments in combination with natural white rubber, in fact it has been done:

The above are specialty tires from Double Star Tyre, a Chinese manufacturer, and are mostly intended for show use (these likely use standard plastic pigments along with silica filler — similar compounds are used for sneaker soles — this provides good traction but much poorer wear characteristics than carbon black).

A somewhat more mainstream variant is the Scorcher tuner-car tire from BF Goodrich, which has embedded colored bands: 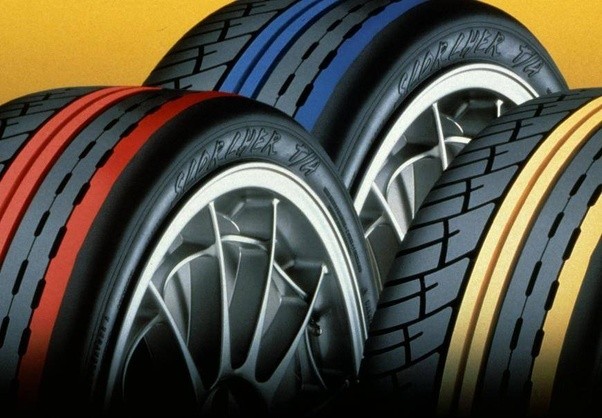 So it’s possible to make useful tires with pigmentation other than carbon black. However no other readily-available filler has been found with the combination of beneficial properties seen in carbon black.

There are also practical considerations; colored tires would be harder to keep clean and might tend to clash with the color and style of the car itself — even if mutiple colors were made and stocked (itself a logistical challenge that would increase prices) there would be many color shade combinations that clashed, while “black goes with everything”.

Related Topics:
Up Next

Common features in cars most people don’t know the use